There are people out there that dislike gold. They think it’s overrated, that everyone wants to have it, and naturally, we can understand that. After all, gold is everywhere – necklaces, statues, bracelets, lockets, music boxes, even food. And gold isn’t just everyWHERE, it’s also everyWHEN. Cultures as old and as distant as Sumerians, Ancient Chinese, Aztecs, Egyptians, and others held gold in high regard. Out of all the precious metals, gold is the one people died over the most throughout history. But why?

Well, gold is a bit more than just “shiny and pretty.” It’s an excellent conductor of electricity, easy to shape and very durable in the cold vacuum of space. That makes it the perfect metal for modern tech. And that’s why its value remains the same despite the many ebbs and flows of the world economy. It’s no wonder, then, that people in the financial spheres are looking to invest in precious metals.

Which Precious Metals Can You Invest In?

Most major industries require these materials. Platinum, for example, is used in the automobile industry, medical equipment, and computer technology. Silver is just as good for computer tech, as it doesn’t corrode or oxidize as other metals tend to. Then there’s palladium. It’s softer than platinum, which makes it great for catalytic converters. Another major selling point of palladium is that it can withstand high temperatures. We can use it for the processing of raw materials, photographs, for purifying water, purifying and refining both oil and natural gas, as well as for fuel cells. Most people use it instead of gold because of these properties. 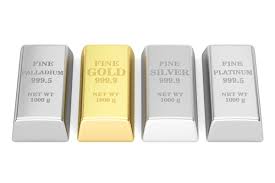 Each of these four elements has seen a price jolt in the past decade or so. Tech and economic giants such as India and China frequently seek out large quantities of these metals for their growing industries. In short, precious metals aren’t just for jewelry and pretty statues.

The price of gold rose to a staggering $1.252 per ounce (not adjusted for inflation). That’s a 300% rise in the last half a decade, with a very steady uptrend. It might be a good idea to invest now, as it doesn’t show any signs of dropping anytime soon.

Platinum has dropped, though, by about $700 since ten years ago. Palladium has dropped comparatively more, half of the $1100 it was worth in 2008. Similar numbers are there when it comes to silver.

So Why Would We Buy Precious Metals With These Prices?

With the current recession, the U.S. government is trying its best to combat its outstanding debt. But with more money being printed, the inflation grows, and paper in and of itself has no real value.

Therefore, investing in precious metals which don’t lose their intrinsic value sounds like a wise choice. It’s far safer than investing in a failing or weakening paper currency.

Where and How to Buy Precious Metals?

There are several ways to buy precious metals:

Precious metals are in high demand. That’s a fact. However, that doesn’t mean that there will be immediate price rises. This is because the supply of each of these metals changes all the time, and it depends on mine depletion (or mine discovery) and large holder-based sales.

However, before you try to buy a precious metal or two, make sure you’re well learned on the subject. Be mindful of storage for coins or bullion. In addition, keep in mind how volatile the prices are. That way, you can plan for the long-term when it comes to precious metals’ investment.